Versions of this story have appeared in the Environmental Science & Engineering magazine‘s October 2018 edition as well as the Journal of the Northern Territories Water & Waste Association’s 2018 edition.

The largest solar array in Manitoba will offset the power required by the plant, helping the community move away from the diesel fuel that creates the contamination issues that the plant is also helping to resolve. Photo credit: Boke Consulting

“The North is the North,” Ken Mattes begins. “You get down to 40-below, you discover all sorts of things that can go wrong.”

“Northlands [Dënesųłiné First Nation] had a Sequencing Batch Reactor-based mechanical system with a lot of problems thanks to the cold.” Mattes rattles off a laundry list of issues: balancing sludge, pipes that had overheated and melted, even a door that didn’t close right that had let in freezing cold air.

Northlands knows cold: located at 58°36’ N on the shores of Lac Brochet, even the average winter day features temperatures near -30°C. There’s a tendency to view the cold as an added complication, and to contend with it, additional systems must be put into place. But as Mattes speaks, it becomes clear that the solution involves not more complexity, but increased simplicity and sustainability.

“The ease of operating and maintaining a SAGR really sets it apart,” says Mattes. “If you get into Level 3 plants, you need two years of post-secondary education just to operate it. But with the SAGR, the sewage goes into the lagoon, and clean effluent comes out with very little effort.”

The SAGR is an in-ground, fully-aerated, horizontal-flow rock media bed that uses a patented process to grow multiple sets of the biomass that reduce ammonia in wastewater to non-detect levels, even in lagoon effluent that can fall below 1°C.

Yet what truly sets this treatment plant apart—possibly from any other on earth—is the SAGR’s role in enabling the community to achieve greater sustainability.

“Northlands is one of four Manitoba First Nations dependent on diesel for power, and they hate it,” says Bruce Duggan, owner of Boke Consulting and an Associate Professor of Management at the Buller School of Business at Providence University College & Seminary.

Getting sustainable is a big part of the new wastewater treatment plant on two fronts. The first is offsetting the site’s power draw through a 282-kilowatt solar array. “It’s the largest such array in Manitoba,” declares Duggan, “with over 1,000 solar panels, each measuring one metre by 3 metres.” During the long summer days and even in the shorter days in winter, the solar cells will help power Northlands’ grid, contributing enough energy to offset the 270,000 kWh/yr it will take to aerate the plant’s lagoons and SAGR, as well as power two new alternative energy heating systems: the new biomass heating system at Northlands’ school and the new geothermal heating system for several buildings and houses at the former Federal School contaminated site.

But the wastewater plant does more than just generate its own power. In addition to treating the municipal wastewater, the new wastewater system is being used to treat contaminated soil and groundwater.

“No matter how careful you are with diesel, it will get into the ground, and when your community is built on an esker—a sand and gravel ridge—leaked diesel plumes.” A small leak, Duggan explains, may seep down 3 meters but have a 10-meter spread. Rather than “digging and dumping” each instance of diesel contamination, each of which could cost anywhere from $50,000 to over a million dollars to remediate, we’re lancing the contaminated soil,” explains Duggan. Lancing is a process by which steel rods are pushed into the ground. Oxidizers and surfactants are injected to break down and unbind the diesel from the sand and gravel particles, and then diesel and contaminated groundwater are pumped out through small wells.

“Then,” continues Duggan, “by using the treatment plant’s lagoon and SAGR instead of a consumable carbon filters [for the leachate], we will be able to break down the diesel and associated chemicals and return the cleaned groundwater back to the ecosystem.” Duggan and others involved are of the belief that the dual-purpose wastewater and diesel contamination treatment system is indeed the first time it has been done globally.

Ultimately, credit for the innovative plant belongs with the community. “In southern communities you face a lot of skepticism,” says Duggan, “but in Northlands, people are determined to take care of their lands. They’ve lived here for thousands of years. We did not have to convince anyone of anything.”

“It’s a thrill to be involved in this project because of the difference it’ll make,” concludes Mattes, “not only for the template it could provide to protect the environment in northern Canada, but for Alphonse, the operator at Northlands, and his community specifically.” 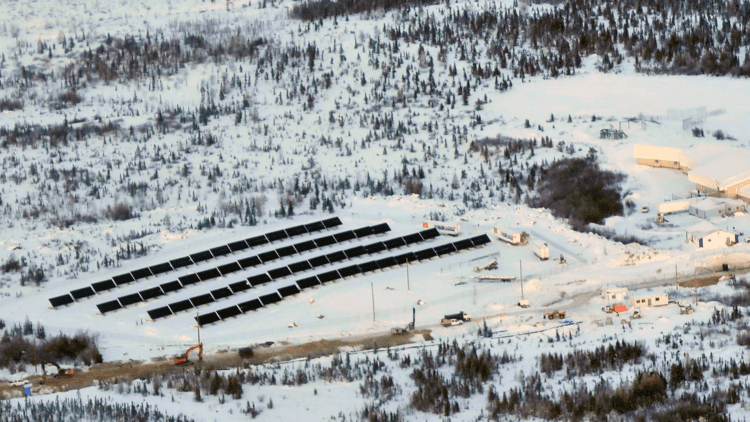 The largest solar array in Manitoba will offset the power required by the plant, helping the community move away from the diesel fuel that creates the contamination issues that the plant is also helping to resolve. Photo credit: Boke Consulting 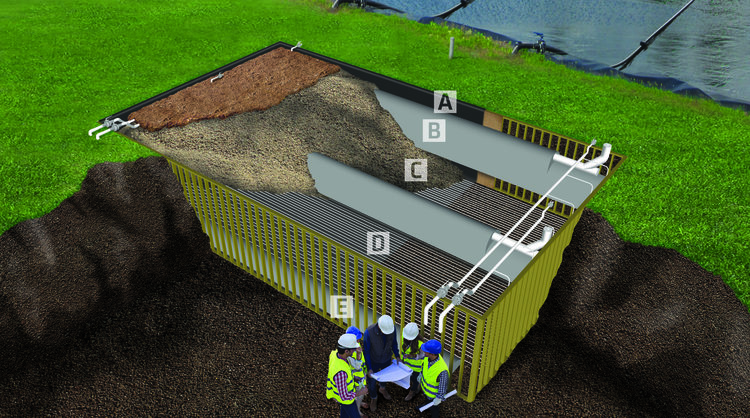