Water is considered sacred by First Nations communities for its interconnectedness to all life. As a result, the importance of protecting it is further heightened.

Geography and cold climate conditions create challenges for both existing and proposed water and wastewater treatment facilities, where minimal road access presents the initial roadblock to bringing in construction equipment and trained personnel. Existing systems are overloaded, with budgets stretched tightly to both make repairs with limited resources and knowledge, as well as make updates in order to keep up with rapidly changing federal regulations.

Many First Nations communities in Canada can be found in these remote areas, located as far north as the famous 60th parallel latitude, where already-limited access is further restricted to certain times of the year or not at all.

Long Plain First Nation (LPFN) is an Ojibway and Dakota community located more than 90 minutes west of Winnipeg, in the Central Plains region of Manitoba. In 2009, there was already an existing wastewater treatment facility inside the community, a Sequencing Batch Reactor (SBR) that was no longer meeting effluent quality requirements due to both facility age and population growth. As a result, community leaders sought a new solution.

The criteria for a new wastewater treatment facility fell within two categories.

The first criteria were operations and maintenance (O&M). In remote communities, it can be difficult to find individuals who possess the qualifications needed to run O&M intensive treatment facilities, as well as expensive and time consuming to get the needed parts and expertise on site should repairs be required. This meant the new facility needed to be both relatively simple to run and easy to maintain.

The second category was performance. The system would need to meet Canada’s Wastewater System Effluent Regulations (WSER) of 2012, which specified that effluent un-ionized ammonia cannot be acutely lethal for fish – meaning it can’t exceed 1.25 mg/L.

But the stakes for the performance of the chosen wastewater treatment system were higher than simple regulatory non-compliance. Given the unique relationship to water held by First Nations peoples, any system installed would need to be capable of reliably and safely discharging into the Assiniboine River, therefore protecting fish and wildlife in the region.

Biological wastewater treatment using lagoons has been a common answer for communities seeking low O&M solutions. But they come with cold climate challenges. In a typical unaerated lagoon, once ice forms on the surface, the ability of oxygen from the air to dissolve into the water and reach the nitrifying (ammonia-removing) bacteria disappears. Even when lagoons are aerated, near-zero water temperatures slow bacterial metabolism down to a fraction of previous.

In order to take advantage of the low O&M requirements of a lagoon but still produce the effluent quality needed to protect fish and wildlife, while also continuously discharging through winter, engineers for LPFN chose a two-cell partial-mix aerated lagoon, followed by a SAGR® submerged attached growth reactor for ammonia removal, and two vertical-flow, continuous backwash sand filters with alum addition for phosphorus removal.

The goal was to create a process that was reliable, simple and cost effective to operate, while also being capable of providing consistent performance in winter water temperatures (November through April) that can be less than 1°C.

In the spring of 2012, construction began on the new facility. A two-cell, partial mix lagoon-based system using a Nexom optAER® system, was constructed on a greenfield site. In comparison to conventional mechanical treatment facilities, optAER-enhanced lagoons maintain the simplicity of a lagoon system at a fraction of the costs to construct and operate.

Aeration provides oxygen, residence and contact time for the natural bacteria, which ultimately convert the wastewater contaminates (BOD, ammonia, and TSS) to carbon dioxide, water, inert ash and nitrates. It also provides effective odour control. The optAER system does not rely on algae or natural surface aeration for providing oxygen to the wastewater.

The optAER aeration system consisted of floating laterals and a trio of positive displacement blowers. With floating laterals, lagoon cells also don’t need to be dewatered or taken out of service for installation or maintenance – all of the work can be completed from a boat, using a 2-person crew.

The three blowers provide the necessary air supply during normal system operations, as well as have the capability to operate at maximum pressure for diffuser purging.

The additional benefits of using positive displacement blowers include consistent flow of air to the lagoon regardless of discharge pressure, as well as simple operation and maintenance. Each blower included a sound-reducing enclosure.

In aerated cells, diffuser density is based upon oxygen demand. The system installed at LPFN consists of fine-bubble aeration distributed through diffusers suspended near the bottom of the pond to maximize oxygen transfer efficiency. The diffuser design prevents bubbles from combining, resulting in excellent oxygen transfer rate.

The diffusers are suspended at a uniform depth and attached to the floating laterals for ease of retrieval. Through the rise of the bubbles and subsequent mixing, the solids settle out through the downward motion of the water between the diffusers when the circulation loop closes. When the solids reach the bottom of the lagoon, diffusers near the cell bottom provide additional oxygen for biodegradation. This process results in minimal organic bottom sludge accumulation, and aerobic digestion takes place within the aerated cells. This, combined with the slow rate of bubble rise, contributes to the overall efficiency of the system. Because of low sludge production in the system, retention time is retained for long term BOD removal. Providing oxygen at the sludge water interface significantly enhances long term organic solids digestion and sludge quantity reduction.

At LPFN, two SAGR beds for secondary treatment were created after the lagoons as part of the green-field construction. The two cells were constructed in parallel, meaning that water from the lagoons is divided and distributed evenly over both cells before recombining at the end of the beds for delivery to the sand filters for final treatment before discharge.
The SAGR is a patented process providing full nitrification as well as BOD and TSS polishing in cold to moderate climates. Presently installed at 43 locations across North America, with more than 25 additional systems currently being installed, the SAGR features a clean gravel bed with evenly distributed wastewater flow across the width of the cell, and a horizontal collection chamber at the end of the treatment zone. Linear aeration throughout the floor of the SAGR provides the aerobic conditions that are required for nitrification. The gravel bed is then covered with a layer of wood chips or mulch for insulation.

SAGRs have been used to consistently reduce Total Ammonia-Nitrogen (TAN) levels in near-freezing water to levels below 1 mg/L (note that the un-ionized ammonia mentioned in WSER is a component of TAN, the proportion of which is related to water temperature and pH). Its patented Step-Feed nurtures the nitrifying bacteria needed to reduce ammonia to less than 1 mg/L in less than 1°C water. In addition, with the only moving parts being the blowers supplying air to the system, the system’s O&M requirements are like that of an aerated lagoon. Other benefits of the SAGR system include low capital and operation costs, full nitrification in all seasons, and compatibility with existing facultative lagoons, as well as fecal and total coliform removal.

Air supply for the SAGR aeration system is provided by a single positive displacement blower. However, one of the three installed for the lagoons is set up to assist should maintenance or additional air supply be required.

The blower provides aeration to the SAGR cells via diffuser lines attached to linear coarse bubble diffusers. This piping system is designed for direct burial in the SAGR beds, where the lines are spaced to accommodate the projected oxygen demand of the SAGR. This full aeration grid also minimizes wastewater channeling in the gravel layer to maximize retention time and media contact, as well as provide enhanced sludge digestion in the gravel layers.

Ease of operation was a primary consideration when developing the SAGR process. There are no sludge or solids management requirements, making the operation and maintenance of the process similar in complexity to that of a conventional aerated lagoon. The only moving parts in the system are the blowers supplying oxygen to the process. Process control requirements are limited to seasonal (twice a year) manipulation of the influent control valves.

The final step in the process is a pair of continuous backwash Upflow Gravity Sand Filters for the purpose of tertiary treatment. Aluminum Sulfate (alum) was added during this stage for final polishing, as well as phosphorus removal via a process called coagulation.

The alum is added to the system via the pipe that runs into the mixing tank. This rapid mix zone ensures that the alum is distributed evenly within the wastewater to maximize reaction with the dissolved phosphorus. Once the alum treated wastewater reaches the mixing tank, the gentle mixing cycle allows the alum and phosphorus to bind together into flocs. These flocs are then easily removed by the sand filter, resulting in the water quality produced by the system being safe for continuous discharge to the Assiniboine River.

Construction of the new wastewater treatment facility in LPFN was started in the winter of 2011 and completed in May 2012. After successful construction completion, Nexom field staff and engineers provided commissioning and operational training in June 2012. Since commissioning, the site has consistently met the federal regulations for all parameters. 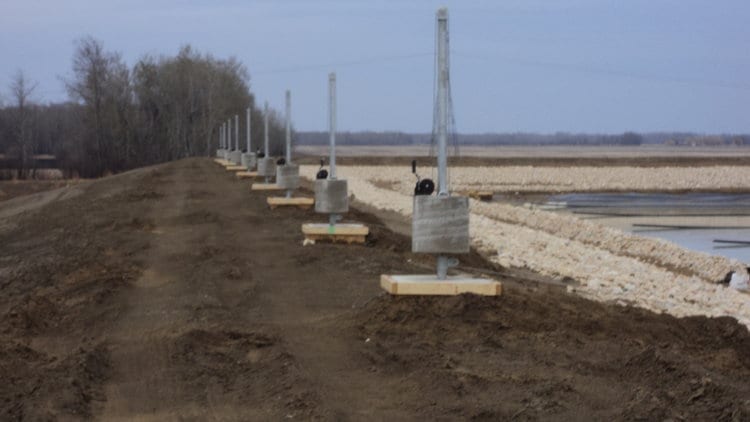 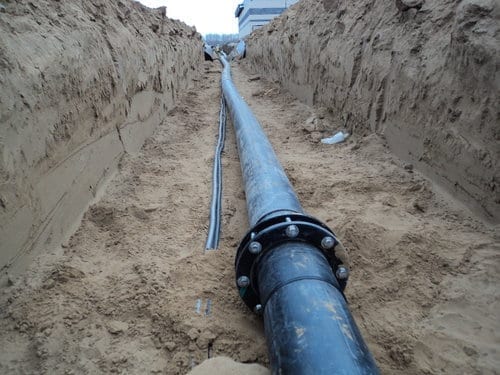 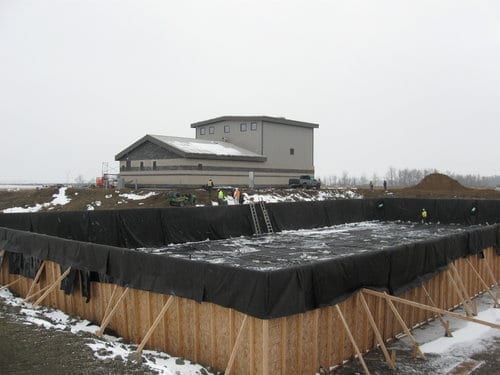 The SAGR at LPFN has shown to consistently reduce lagoon effluent ammonia that can peak at 17 mg/L down to an average effluent level of 0.15 mg/L. The system has never produced an effluent TAN data point in excess of 0.77 mg/L and averaged 0.15 mg/L year round, which is well below the treatment objective of 5 mg/L in winter and 1 mg/L in summer. It also effectively polished BOD routinely to under detection levels of 2 mg/L since November 2014.

Furthermore, the system posted these consistent results while also accommodating changes to its primary operator. 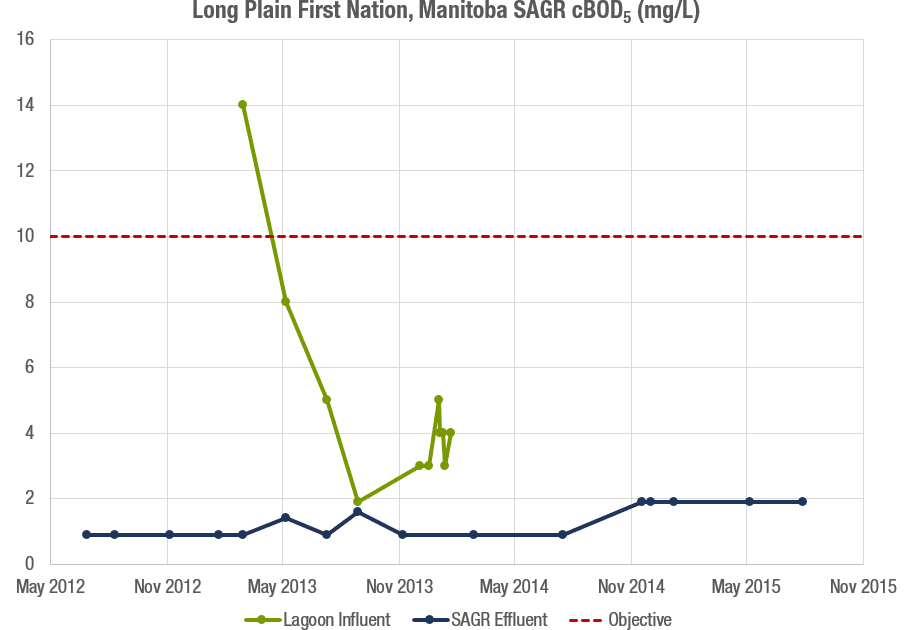 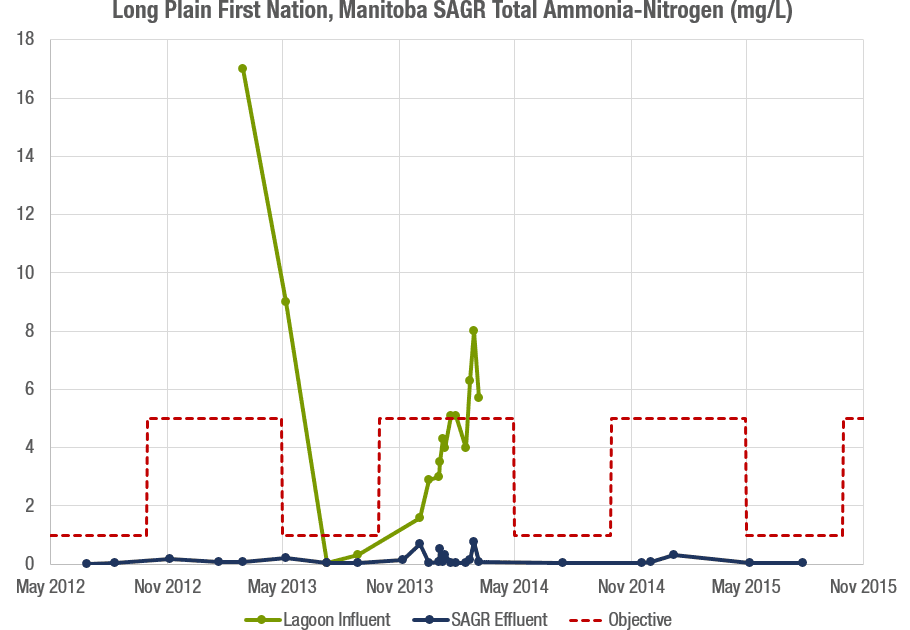 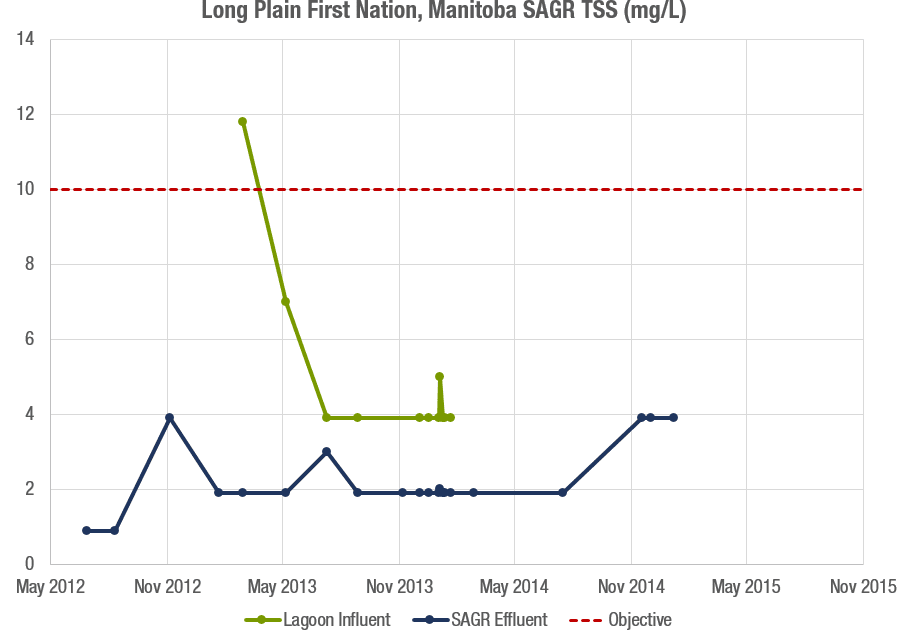 Long Plain First Nation now has a technologically advanced wastewater treatment system that is simple to operate and maintain, while also being capable of handling a growing population. Now almost seven years since startup, the system continues to reliably meet federal wastewater regulations, is environmentally responsible, and has put LPFN at the forefront of small-community wastewater treatment in Canada.

END_OF_DOCUMENT_TOKEN_TO_BE_REPLACED 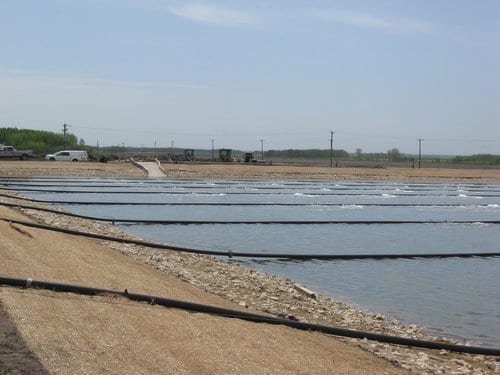 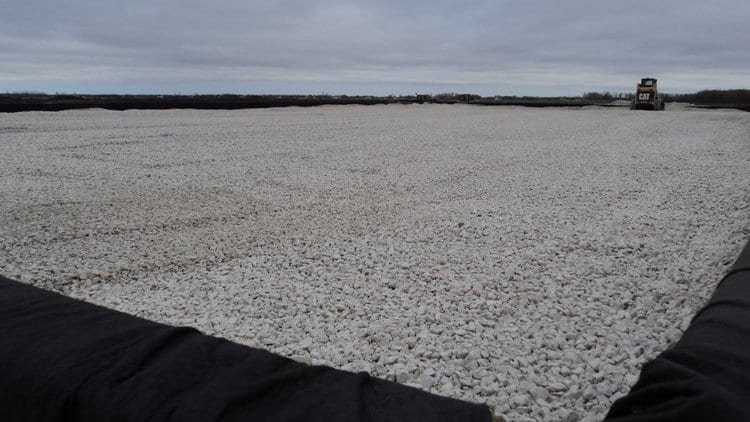 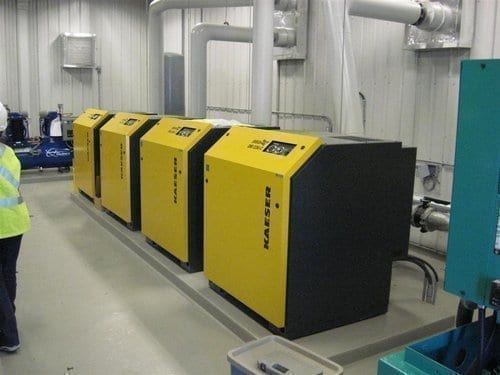