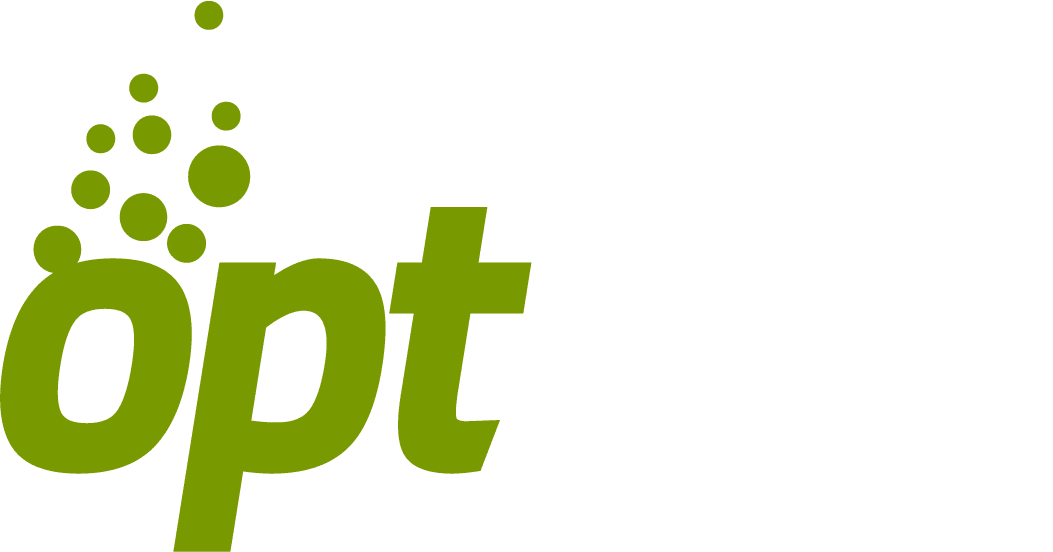 The town of Martensville, Saskatchewan, is less than 300 KM (173 M) from provincial capital Regina but less than 20 minutes north of Saskatoon. It can be found roughly halfway between the North and South Saskatchewan Rivers, where it inhabits a region of aspen parkland – the transitional zone between the expected prairie grasses of the south and the rugged boreal forest in the north. North of Saskatoon, the Martens family had originally purchased a plot of land in 1939. Sections of this land were later sold to other families also wishing to live in a small community, eventually resulting in the community of Martensville. First incorporated as a town in 1969, it would gain sewer and water systems in 1976 as more and more people began to move into the area.

Officially granted city status in 2009, many people who work in Saskatoon choose to live in Martensville, given its proximity and the ability to retain close connections within the community. In fact, the most recent Canadian census places the population of Martensville at nearly 10,000 people – making it the 11th largest city in the province. Starting first in 2004, Martensville sought to upgrade their wastewater treatment facility. Faced with a rapidly expanding population and a pair of facultative lagoons, city engineers turned to a combination of Nexom’s optAER® fine-bubble lagoon aeration with patented Float-Sink headers, to ultimately create a solution.

The original treatment system (facultative ponds) had been adequate for wastewater treatment until the area began experiencing rapid population growth. In 2004, the existing system was no longer able to maintain permit levels of Biochemical Oxygen Demand (BOD) and Total Suspended Solids (TSS). Additionally, facultative (or passive) wastewater storage ponds are well known for producing odors, particularly during spring break up.

One option for increasing capacity, without constructing additional lagoons or expanding existing ones, is to aerate the lagoons. Aerated treatment cells greatly reduce the footprint of the treatment upgrade as compared to installing additional facultative cells.

The initial upgrade was created in two phases. By pre-planning for greater needs in the future, the system was designed so additional diffusers and piping wouldn’t be required to upgrade the system for higher flow, as the projected increase in oxygen demand could be met easily by increasing the speed of the existing blowers. The first phase was designed to handle the 2004 population of 6,000 people, at a flow rate of 1,800 m3/day.

Two new optAER aerated lagoons were constructed, and the existing facultative lagoons were converted to storage cells. By doing this, Nexom was able to address increased loading and rapid community growth in a way that made use of previous treatment infrastructure investments. Additional modifications were also completed at this time in preparation for the second phase. Headers were added around both the new aerated lagoons and the existing storage cells, which would allow for further expansion of treatment plant capacity in the future and enable the addition of aeration to the storage cells in the future.

Air was provided to the system via one 75 hp positive displacement blower, with a second blower on standby. This allowed for redundancy in the system in the case of regular maintenance or repairs to the primary blower. It also provided room to expand system capacity in the future. Both blowers are housed inside a precast concrete building to provide protection from the elements, and came with full sound enclosures, which effectively reduce the noise level within the blower building to below 73 dBA.

During both phases, the fine-bubble aeration diffusers pivotal to the optAER system provide excellent operational flexibility, operating in an airflow range of 5-20 SCFM. The airflow can be adjusted to accommodate variable load conditions while also providing cost effective future upgrades to increase capacity. Fine bubbles also mean greater surface area and a slower rise rate when compared to traditional “coarse bubbles”. This increases the overall oxygen transfer efficiency of the system, and effectively mixes the water to ensure aerobic conditions throughout the pond.

The diffusers are placed at the bottom of the pond, suspended from air distribution floating laterals on the surface of the pond. This provides a level surface, meaning diffusers can be installed at consistent depth regardless of the condition of the bottom of the pond. Equal diffuser submergence allows for even distribution of air, providing consistent mixing and prevents the formation of localized anaerobic zones, which can create odor issues.

The second phase would allow the WWTF to accommodate the needs of a future population of 8,000, with a flow rate of 2,400 m3/day. In 2008, the storage cells were aerated with the optAER aeration system, using the headers pre-installed during the initial construction of the new lagoons in 2004. Linear aeration tubing was installed in the shallow storage cells to provide gentle mixing and maintain aerobic conditions in order to minimize odor generation, as aerating the water throughout the winter is very effective for minimizing “spring turnover” odors.

Growing with the community:

Unexpectedly rapid population growth saw the community of Martensville hit its 20-year population projection within ten years. In 2013, the town reached out again to Nexom, seeking a solution. In order to gain additional capacity from the current structures, a third aerated storage cell was constructed in order to accommodate the increase in flow. The blower servicing the storage ponds was also replaced with a larger one to supply the required oxygen.

In 2019, the City of Martensville began to also experience ragging issues within the ponds, where the diffusers were being blocked or disconnected by debris. At this time, they requested a way to reduce the debris movement within the ponds.

In order to maximize the existing infrastructure, and keep costs relatively low, Martensville added Nexom’s patented Float-Sink® lateral system alongside the floating laterals in the two aerated ponds. The Float-Sink aeration system is designed to allow for easy diffuser maintenance and/or inspection, without dewatering aerated ponds. The laterals and diffusers normally sit on the bottom of the pond, but individual Float-Sink laterals can be raised to the surface from shore by manipulating ballast control valves.

Nexom’s patented Float-Sink aeration system, used alongside traditional floating laterals, allows for easy diffuser maintenance and inspection, without the need to dewater aerated tanks or ponds. Ballasts are polypropylene geotextile sandbags (Saddle Bags™) so no concrete weights are required. Once the lateral is out of the water, a two-man crew working from a boat can easily clean or replace the existing diffusers and/or replace them with new ones. The header system then allows for the lateral to be lowered back to the water’s surface by manipulating a valve on shore. With all floating laterals, the cells do not need to be taken out of service during maintainence.

In addition to installing the Float-Sink® lateral system, Nexom also used a different style of diffuser from what was already in the pond. These were mounted to the Float-Sink laterals, and helped to provide improved distribution of oxygen and enabled Martensville to continue using their existing equipment. 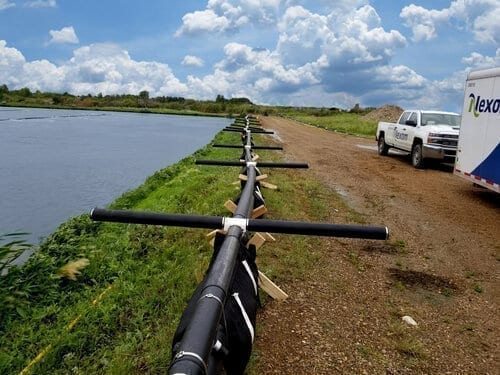 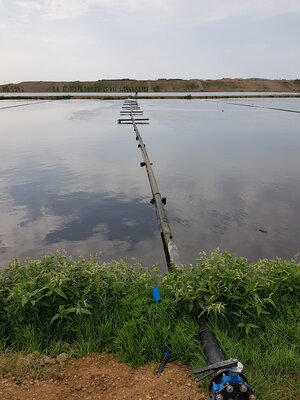 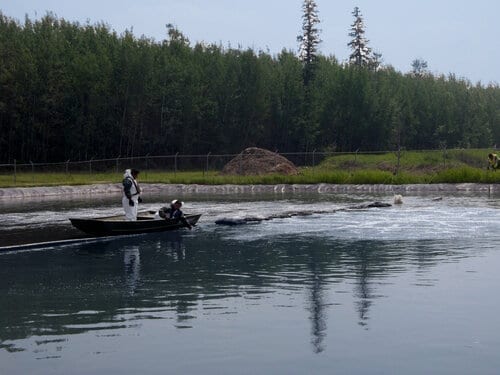 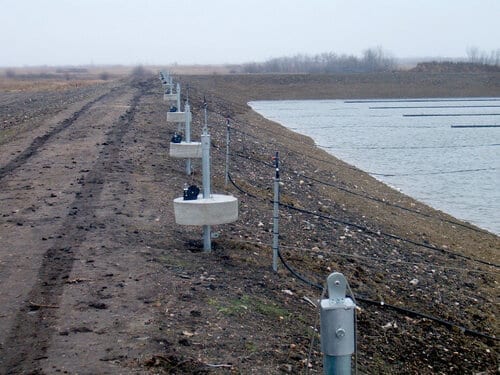 Due to the ongoing and rapid expansion of the community, it was decided rather than continuing to treat the water themselves, that the wastewater would instead be transferred to the nearby City of Sasktoon for treatment.

Planning began in 2019. Under this proposal, the existing lagoons in Martensville would now become equalization basins for the pumping system. Equalization basins are used to provide consistent influent flow to downstream wastewater treatment processes by retaining high flow fluctuations. The purpose of flow equalization is to balance out the process parameters, such as flow rate, organic loading, strength of wastewater streams, pH, and temperature over a 24-hour period.

Due to the additional retention time, aeration and mixing would still be required to prevent raw wastewater from becoming septic and to maintain solids in suspension. This will mean fluctuating water levels, which can be problematic for floating aeration systems. However, since Martensville has a Float-Sink aeration system, which allows for the laterals to be raised or lowered easily when required, this challenge could be easily overcome. Under this new plan, Martensville will continue to use the Float-Sink lateral aeration equipment as part of the design of the new facility, when the ponds are converted into equalization basins. 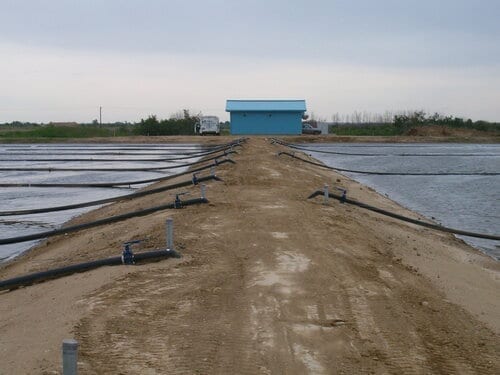 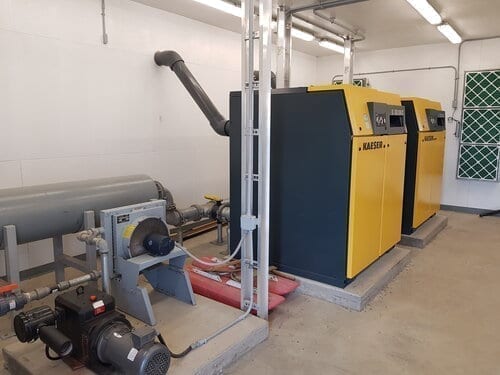 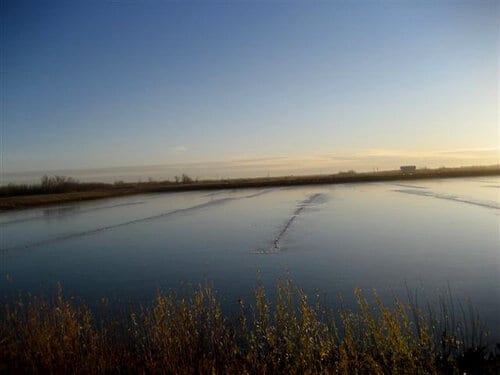