The Metro Wastewater Reclamation District is the major wastewater treatment authority of metropolitan Denver, CO. The Metro District’s Robert W. Hite Treatment Facility (RWHTF) has been operational since 1966, and serves approximately 2 million people. As one of the largest wastewater treatment facilities west of the Mississippi (220 million gallons / 832,790 cubic meters per day capacity) the plant treats and reclaims about 130 million gallons / 492,104 cubic meters each day, which is 85 percent of the downstream South Platte River 6 months of the year.

The plant had 12 aeration basins with 9-inch diameter ceramic stone discs (5,352 discs per basin); placed into service in 1989. The ceramic diffusers were approaching the end of their useful life, creating reliability concerns for the Metro District. Diffusers in 1 of the 12 basins were showing signs of irreversible fouling as chemical cleanings were ineffective at restoring efficiency.

The Metro District had been in talks for some time with Patrick Ely, Regional Sales Manager for EDI and Nexom. Patrick knew SiteWorks™—the aftermarket services division of Nexom and EDI—was well suited to provide the RWHTF with the needed services. Patrick and Joey Green, Aftermarket Account Manager representing SiteWorks, started discussing options to retrofit the diffuser system with the District in Spring, 2020, assisted in this process by our local representative (Cogent’s Water Technology Group).

Denver Metro needed to replace the aging ceramic disc systems and they also sought to improve the oxygen transfer efficiency. To achieve these goals and minimize impacts on system pressure, upgrading to membrane diffusers was the logical solution. One option was replacing the entire diffuser grid with new equipment. However, based on the capability and expertise of the SiteWorks team to self-perform the retrofit installation work, the District selected a more economical approach: to replace the existing ceramic discs with new EDI backer plates and high-capacity membranes while retaining the existing piping and holders. The general contractor Moltz Construction subcontracted SiteWorks to provide the material and labor.

The Metro District initially contracted Moltz Construction and SiteWorks to retrofit the diffuser system in 1 of 12 basins with high-capacity membranes, due to the extensive and irreversible fouling of the existing ceramic discs. Following the successful completion of this work and the positive system response, the District elected to initiate diffuser replacement in the remaining 11 basins over three more phases. The first five basins were completed quickly by the SiteWorks crew led by Nigel Wylie. Moltz and the District staff were very satisfied with the crew’s performance. The District released funding for the next phases and Moltz hired the same SiteWorks crew to complete the remaining six basins. 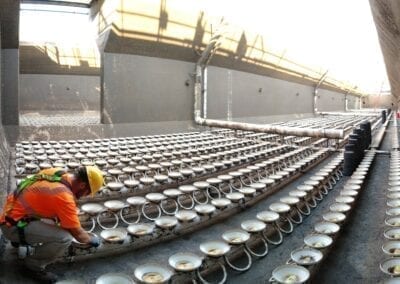 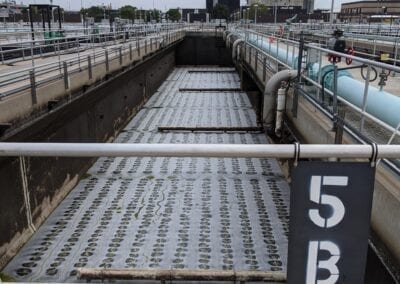 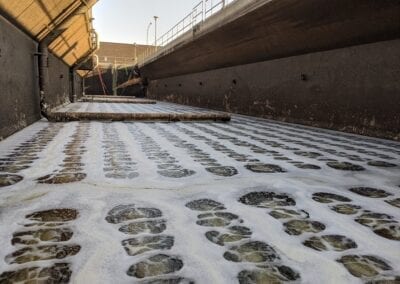 The crew completed all three phases within five months—between June and October, 2020. In addition to replacing 64,000+ ceramic stones with high-efficiency membranes in all 12 basins, SiteWorks inspected the system, cleaned all piping, performed thorough leak checks, and made all necessary repairs.

Under the leadership of Nigel Wylie, the work was planned and executed in accordance with the project requirements and was delivered ahead of schedule.

What made the Metro choose our solution?

District staff reported the SiteWorks team responded with prompt answers and provided good supporting technical details. In addition, the District saw an opportunity to leverage the expertise of EDI and SiteWorks for their technical innovation and efficient project delivery. After observing the efficient execution and extensive knowledge of the SiteWorks field crew on the initial trial basin, the District knew they could expect a high level of service for the entire upgrade across all 12 basins.

The owner and I were quite impressed with Nigel and his crew. If the occasion surfaced, I would enjoy working with SiteWorks again. I would highly recommend this crew to any other municipality looking to upgrade their aeration basins. The SiteWorks crew did an efficient, safe, and respectful job during this project and they were a pleasure to work with.
– Joe Anaya, Moltz Construction Superintendent

We can design custom systems to meet your needs.
Are you ready to Move forward? 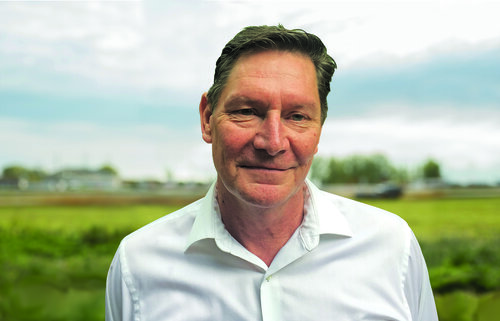