In areas around landfills, one of biggest public concerns is the potential for water contamination. This concern forces not just older sites, but also modern landfill sites to look increasingly to the future in order to be proactive in their effort to keep ground water clean and uncontaminated.

The site of Seneca Landfill is in Butler County, Pennsylvania, just outside the town of Mars. Built with full environmental integrity in mind, development of the site started long before any earth moving equipment arrived. Prior to the start of construction, a team of professionals conducted several comprehensive tests and surveys, including geographical impact (geological and hydrogeological testing, wildlife inventory and monitoring) as well as traffic, historical and demographic research to ensure minimal impact on both the community and the land around it.

Officially opened in 1965, the wastewater treatment plant at Seneca Landfill has the capacity to store millions of gallons of water and process up to 110,000 gallons per day. In order to treat and clean the water, it uses a multi-stage treatment system to process contaminated water from the landfill, so that it can be released safely back into Connoquenessing Creek without any negative impact on wildlife or human populations.

The sources for this water are condensate and deliquification water (both produced only during gas pumping), as well as leachate, which includes sources like rainwater that may meet waste from the landfill and become contaminated. By 2010, modifications and continued studies on environmental impact showed the amount of ammonia in the wastewater from these sources was proving to be too much for the existing system. After studying the various options available, engineers from Bassett Engineering worked with the team from Seneca Landfill to create a plan that that would convert their existing but outdated Bio-Towers to a BioPorts™ Moving Bed Biofilm Reactor (MBBR).

Seneca Landfill is located about 25 miles north of Pittsburgh, where it discharges wastewater continuously into Connoquenessing Creek. Water from the Connoquenessing flows southwest through the Lake Oneida reservoir before ultimately terminating at the Beaver River.

Following a study by the U.S. Public Interest Research Group in 2000, where Connoquenessing Creek was named one of the most polluted waterways in the US, sites that discharge into the creek became subject to stricter ammonia permits on all wastewater being released.

Ammonia management is an increasing concern within the wastewater industry. Research suggests effluent un-ionized ammonia must be as low as 0.2 mg/L to ensure non-toxicity. However, not only is un-ionized ammonia toxic to aquatic life – it can promote excessive algae growth and the loss of dissolved oxygen.

Landfill leachate is a common waste type characterized by extremely high BOD and ammonia spikes. While the average ammonia level in the influent is 1,400 mg/L, Seneca Landfill has historically reported days where the influent ammonia have been higher than 3,000 mg/L. In keeping with their permit limit, Seneca Landfill needed to obtain an onsite ammonia effluent limit of less than 4.7 mg/L and was not consistently able to meet that target using their own system, thereby forcing them to incur additional costs for off-site treatment.

Part of the cause of these high ammonia levels was the decision of the landfill owners to extract the methane gas being produced by the landfill. When organic matter ends up in a landfill, it breaks down over time. As it breaks down, it generates gases, including methane. Methane is a greenhouse gas capable of contributing to global warming and needs to be diverted from entering the atmosphere. Traditionally, landfills use flares to burn off both excess methane and CO₂. Instead, Seneca Landfill wished to capture the methane and convert it into a clean form of natural gas for future use – including helping to power the landfill itself. However, the methane extraction process produces condensate, a wastewater with an even higher concentration of ammonia than the original landfill leachate, rendering the existing wastewater treatment system insufficient.

The original system at Seneca Landfill consisted of three bio-towers, filled with outdated trickling filter media. At the time, only two were in operation – all of which contributed to the system being unable to reduce effluent ammonia to required levels. In consultation with engineers at Bassett Engineering and the operators at Seneca Landfill, a decision was made to convert the existing bio-towers to aerobic BioPorts™ MBBR reactors, which would eventually run in series. The bio-towers would be updated one at a time with new “BioPorts 600” media, which also provided an opportunity to measure effluent characteristics at three different intermediate flow configurations along the way, in addition to the final reactor configuration.

In many cases, the concentration of the various compounds in the leachate changes from day to day, depending on the amount and composition of waste being collected by the landfill, as well as precipitation, temperature, and a variety of other factors. This provides a challenge for the operators of landfill leachate wastewater treatment plants. To help facilitate ammonia removal and maintain consistency for the biomass in the reactors, the wastewater at Seneca Landfill is heated to roughly 27°C (80°F) before it is sent to the BioPorts reactors.

Wastewater enters the fully aerated tank and encounters the biofilm-coated media. Coarse screens are also installed to prevent the patented BioPorts 600 media from leaving the tank. Depending on the configuration, multiple tanks in series can be used to meet low effluent requirements and/or address several different contaminants and nutrients.

Biomass is easiest to retain when it’s fixed to a surface. When the intent is to remove BOD, nitrify ammonia, or even denitrify nitrates, growing bacteria on a surface minimizes the washout that occurs in a suspended-growth environment. BioPorts 600 media is optimized for surface area in order to encourage attached bacteria growth, ensuring that all 179 ft²/ft³ of media surface area are available to biomass. Created out of high-density polyethylene (HDPE) with carbon black, the dimensions of each piece of media are carefully engineered to balance size and shape. This is designed to enable both coarse media retention screening and effective media motion.

The retrofit of the first bio-tower to a BioPorts MBBR reactor was completed in September 2011. By updating the towers one at a time, this ensured minimal disruption and downtime for the landfill. It also provided an opportunity to measure effluent characteristics at three different intermediate flow configurations along the way, in addition to the final reactor configuration

The first configuration consisted of wastewater flowing through one of the non-retrofitted bio-tower filled with old media, followed by the newly upgraded BioPorts MBBR reactor in series. At this configuration, average ammonia removal efficiency was measured to be 88.9%, with a standard deviation of 17.0%.

The second bio-tower was completed by the end of November 2011. This second configuration consisted wastewater flowing through the BioPorts MBBR reactors in parallel. At this configuration, the average ammonia removal efficiency has been measured to be 95.5%, with a standard deviation of 7.3%.

The third configuration consisted of two BioPorts MBBR reactors in series. At this stage, ammonia removal rose slightly to 98.5%.

The project was completed over the course of 6 months, with the third BioPorts reactor coming online in June 2012. The final configuration consisted of wastewater from the landfill flowing through the three upgraded BioPorts MBBR reactors in series. Initially, there wasn’t a significant improvement once the third reactor was put online, but further testing attributed that to the reactor being stressed too quickly and the biomass being unable to acclimate. Loading rates were decreased to the third reactor, which allowed the biomass to adapt appropriately and produce the more expected result. 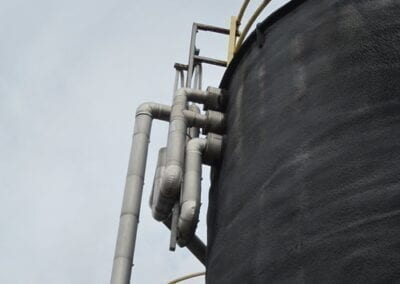 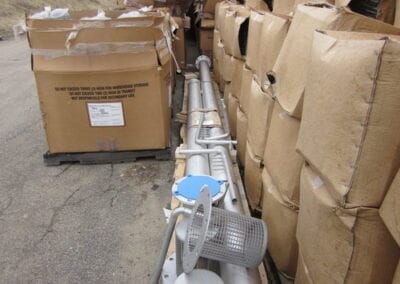 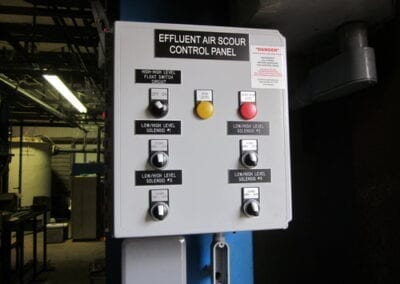 The average influent flow rate the Seneca Landfill towers experienced from September 2011 through June 2012 was 18.1 GPM, or 26,000 GPD. This new system is designed to achieve effluent ammonia concentrations of 4.7 mg/L and is consistently able to achieve this limit or less, therefore enabling Seneca Landfill to discharge their wastewater into Connoquenessing Creek.

After the updated BioPorts MBBR reactors were put in place, the landfill was able to achieve it’s ammonia concentration limits, while also achieving their objective to convert landfill gases into green energy. This has allowed them the ability to power not only 1/3 of the landfill’s daily operations, but also to heat over 27,000 homes in Western Pennsylvania. It also supplies compressed natural gas for fueling CNG vehicles (including their own fleet).

However, there are still occasions when there is too much ammonia coming into the system to be treated. To counteract this issue, additional modifications have been made, allowing landfill operators the ability to limit variations in flow rate into the BioPorts reactors, including redirecting the effluent back to the two equalization tanks for further treatment when needed. The end result is a more consistent treatment of the wastewater and the ability to continue optimizing the current configuration and increase the capacity of the system.

The highest noted flow rate into the reactors during the tested time period was 28 GPM, or 40,300 GPD. Despite this large spike, the BioPorts MBBR reactors were successfully able to treat the influent successfully. The operators of the landfill found the system consistently treats the wastewater to below effluent standards at a flow rate of 20 GPM, or 28,000 GPD. 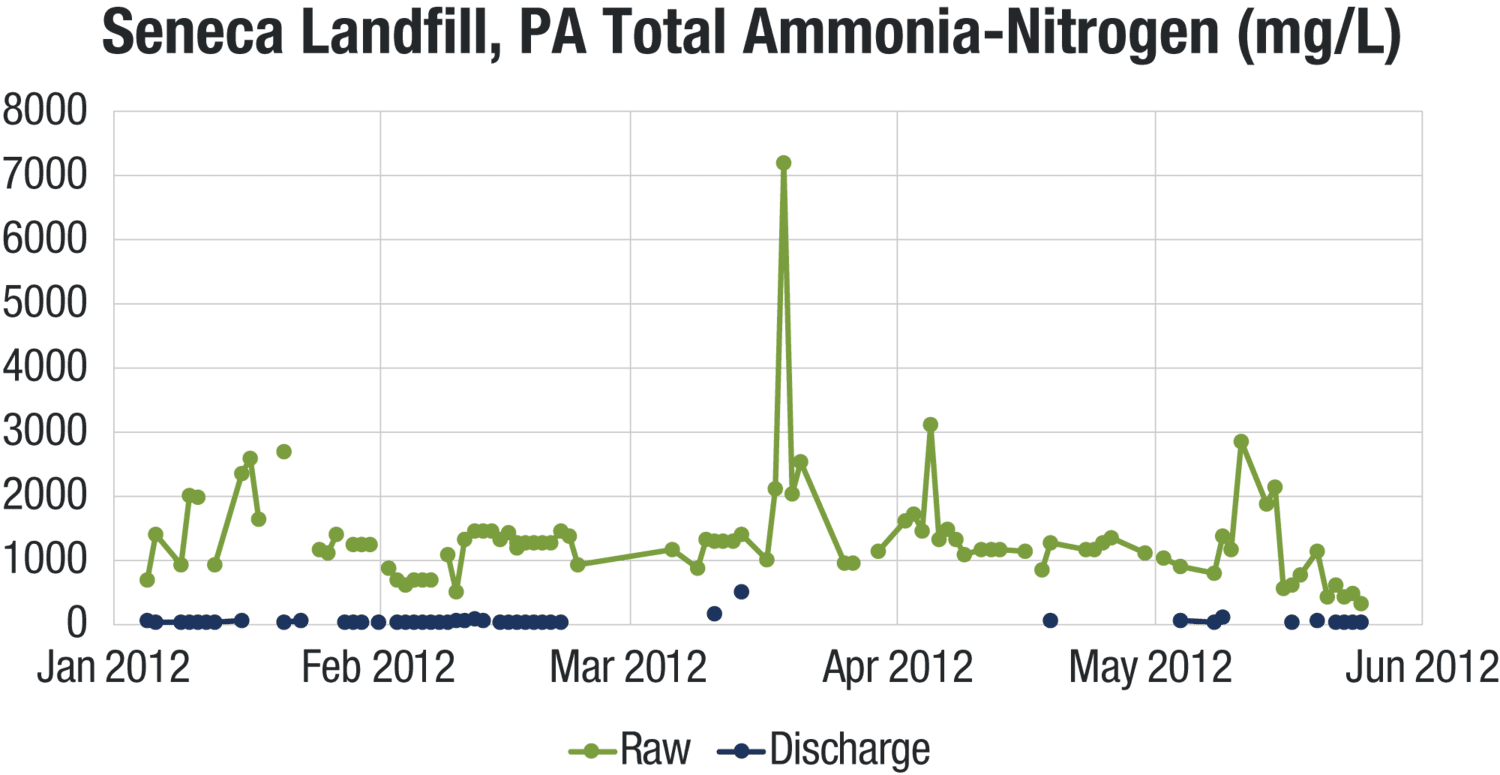 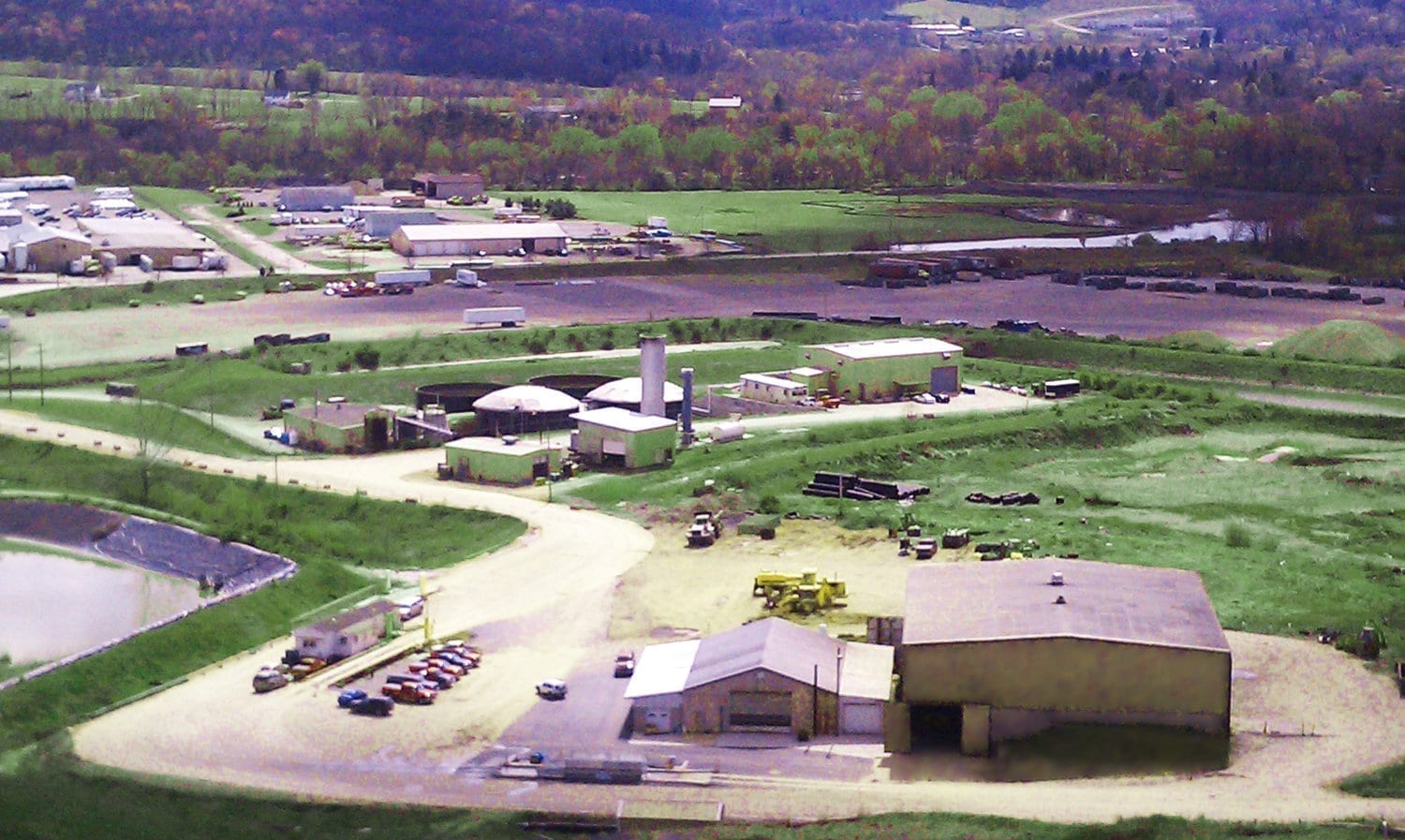