Treatment for glycol-contaminated stormwater to
reduce environmental impact of discharge.
3

Where the Bow and Elbow Rivers meet in the south of Alberta, lies the City of Calgary. It is in an area of both foothills and prairies, located approximately 80 km (50 miles) east of the Canadian Rockies.

In 2016, Calgary was one of only three cities in Canada that saw their population grow by more than 100,000 people over a 5-year period. With a current population of over 1.2 million, Calgary’s economy includes energy, financial services, film and television, transportation and logistics, and technology sectors.

The well-placed geography of Calgary International Airport (known by airport code “YYC”) make it a natural hub. This ideal location, combined with city growth, has contributed to an increase in passenger volume by almost 15.5 million since 2015, tying with Montreal’s Pierre Elliott Trudeau as the third busiest airport in Canada. As part of this growth, the amount of storm water contaminated with aircraft deicing fluid (ADF) discharged by the facility also increased.

In 2015, the City of Calgary informed the airport that discharges of glycol-contaminated stormwater to the city’s sanitary sewer system were having a negative impact on the City’s ability to service new residential and industrial developments. The City strongly encouraged YYC to treat their water to stormwater discharge standards prior to discharge into the sewer system. This request, combined with the rising cost of treatment surcharges levied by the City, meant a case was developing for on-site treatment of contaminated storm water.

When the option is available, most airports discharge glycol-contaminated stormwater to a sewage plant and pay a fee with respect to either the flow or loading. It is a convenient option, but not always the most cost effective, and handling the liquid on site is becoming a reality for many airports.

The flows and loading associated with deicing and anti-icing activities are highly variable. They range from high concentration and low flows in winter, to low concentrations with high flows during snow melt and rainfall. The system for Calgary needed to accommodate these variables, but it also needed to function in cold weather. Winters in Calgary are cold and temperatures can drop as low as −30 °C (−22 °F) for days at a time.

1. Construction of a new retention pond for stormwater collection

YYC had an existing stormwater retention pond, but it was already overloaded. Because of this, it was decided a new treatment system would be designed in conjunction with the new international terminal. The treatment system includes a large stormwater diversion chamber and pump station that intercepts glycol-contaminated stormwater collected from the apron around the international terminal. The pump station then transmits the glycol-contaminated stormwater to a large aerated retention pond, which allows the airport to store their glycol contaminated liquid until treatment. The new pond maintains a minimum water level to help protect the aeration equipment from ice damage in winter, while also helping retain seed bacteria and nutrients. 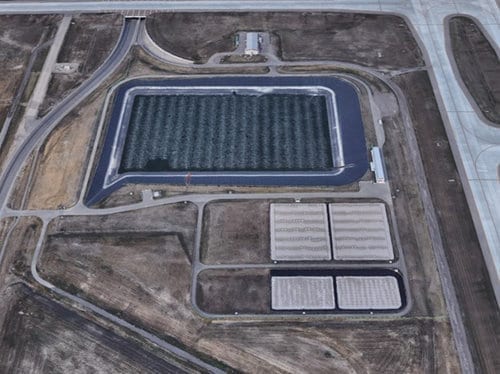 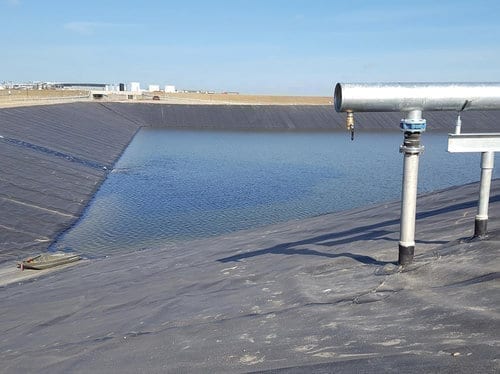 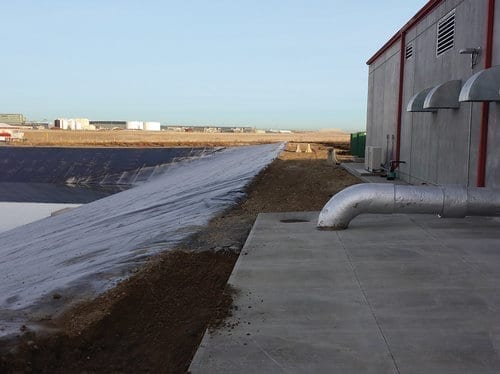 Aerating the new retention pond served two primary purposes – odor control and oxygen distribution for bacteria growth. In order to eliminate odors, engineers from YYC and Associated Engineering chose to install a Nexom optAER system, a pond-based wastewater treatment solution used in a wide spectrum of applications. Issues with odors had already occurred with the existing retention pond and YYC wished to avoid the same issue again. In comparison to conventional mechanical treatment facilities, optAER-enhanced retention ponds and lagoons maintain the simplicity of a lagoon system at a fraction of the costs to construct and operate. Aeration also provides internal sludge digestion, resulting in minimal long-term solids accumulation, and extending pond life.

Aeration also aids in the primary treatment of contaminated water by providing oxygen, as well as residence and contact time for the natural bacteria that ultimately convert stormwater contaminates, like glycol, into carbon dioxide, water, and inert ash. At YYC, the focal point of the optAER system is the fine-bubble aeration distributed through diffusers on lateral piping placed across the bottom of the pond. This placement serves as protection from ice movement during winter, while also maximizing the oxygen transfer efficiency of the system. The diffusers are fused to lateral piping, which are then held to the bottom of the pond by geotextile sandbags to avoid using concrete weights. To increase durability and minimize maintenance, all in-water piping, joints, and fittings were made from high-density polyethylene (HDPE).

The fine-bubble aeration diffusers pivotal to the optAER system provide excellent operational flexibility as they operate in an airflow range between 5-25 SCFM. The airflow can be adjusted to accommodate variable load conditions while also providing cost effective future upgrades to increase capacity. Fine bubbles mean greater surface area and a slower rise rate when compared to traditional “coarse bubbles”. This increases the overall oxygen transfer efficiency of the system, while also effectively mixing the water to ensure aerobic conditions throughout the pond.

At YYC, a total of seven blowers provide air for the system and are housed in a precast concrete building. Four blowers provide air for the retention pond, while an additional three machines are dedicated for secondary treatment. The blower building also houses the nutrient management system that assesses and provides the required nutrient protocol for treatment, as well as a Programmable Logic Controller (PLC) system that monitors and controls the treatment process. The system is designed so that treated water can either be recirculated through the pond for additional treatment, discharged to the secondary treatment process, or, during an emergency, discharged to the City of Calgary’s sanitary sewer system.

Another benefit for using aeration in the pond is its ability to help mix and distribute the water. Since glycol-contaminated stormwater is a nutrient-deficient bacterial food source, in order to achieve full and effective treatment, a nutrient dosing protocol was required to balance the available nutrients (nitrogen and phosphorus) in the water. Engineers determined that batch dosing of a nutrient solution into the recirculation line, when combined with mixing by the aeration system, would provide an effective method of nutrient application and distribution. Approximately 4000L of liquid nutrient solution was dosed into the storage pond at intervals throughout the collection season. This nutrient dosing stimulated the development of biomass within the pond, which continued to treat the incoming loading throughout the collection and discharge periods.

The SAGR is a patented process providing full nitrification as well as BOD and TSS polishing in cold to moderate climates. The SAGR itself is a clean aggregate media bed designed with even wastewater distribution and collection. Linear aeration installed throughout the floor of the SAGR bed provides the aerobic conditions required for glycol removal.

At YYC, the SAGRs are designed for 1500 mg/L BOD influent to achieve an effluent of 20mg/L. The SAGRs are designed to allow for discharging the 117,000 m3 volume of stormwater collected annually over a period of 120 days. The glycol-contaminated influent from the primary treatment pond is distributed evenly over the surface of the first two beds via a piping network. The water then flows vertically through the aggregate layer to collection piping at the bottom of the bed.

Effluent from the primary cells is then either returned to the top of the primary cell beds using a network of recycle piping interspersed with the influent distribution piping or sent onwards to the secondary SAGR cells. Recycling the effluent makes more complete use of the depth of the treatment bed and prevents any reduction in treatment due to short-circuiting.

The glycol concentration in the contaminated stormwater is continuously monitored through online instrumentation. Once the treated water quality meets the City of Calgary’s guidelines, the treated stormwater can be safely discharged into the City’s stormwater system. 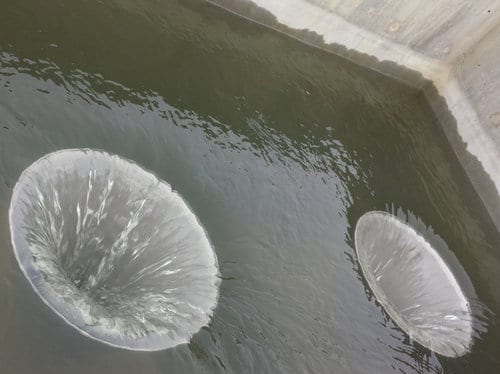 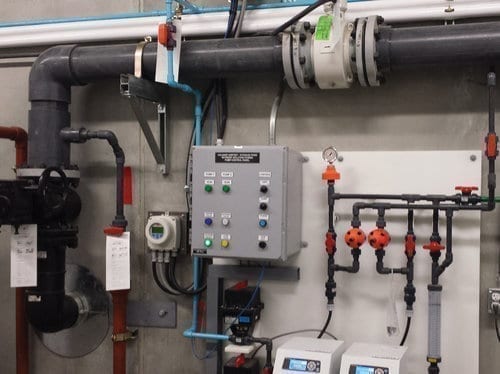 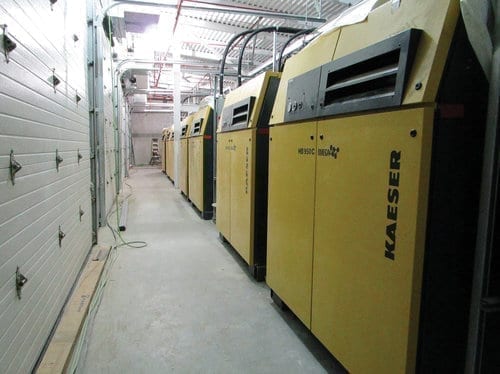 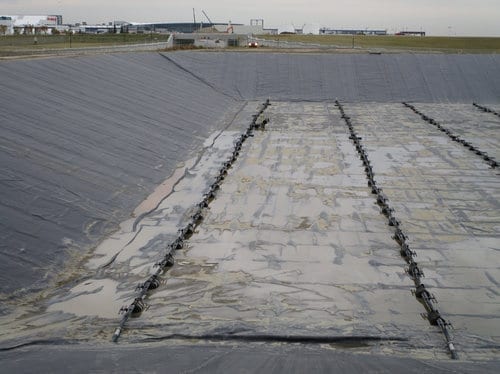 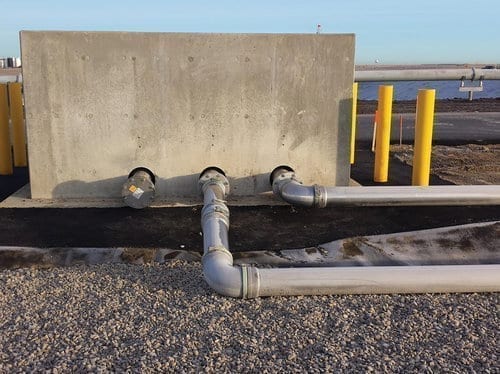 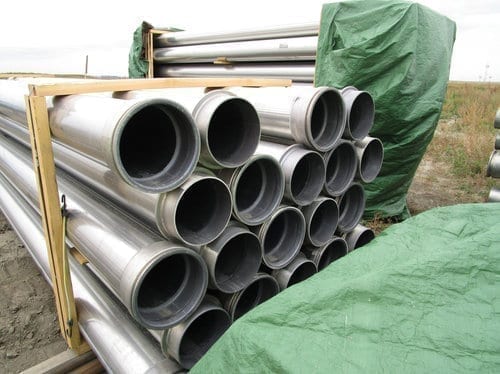 END_OF_DOCUMENT_TOKEN_TO_BE_REPLACED

The SAGR’s were put into operation at the end of May 2017. Water was first pumped into the beds and allowed to re-circulate to the storage pond in order to grow the biomass required for continuous treatment. Once lab testing data showed acceptable water quality, a sample was taken for bioassay. Zero toxicity was found in the live trout bioassay test, and discharge began at the end of June 2017. Despite this late start, the system was able to drain the storage pond to the minimum water level by the beginning of September 2017. 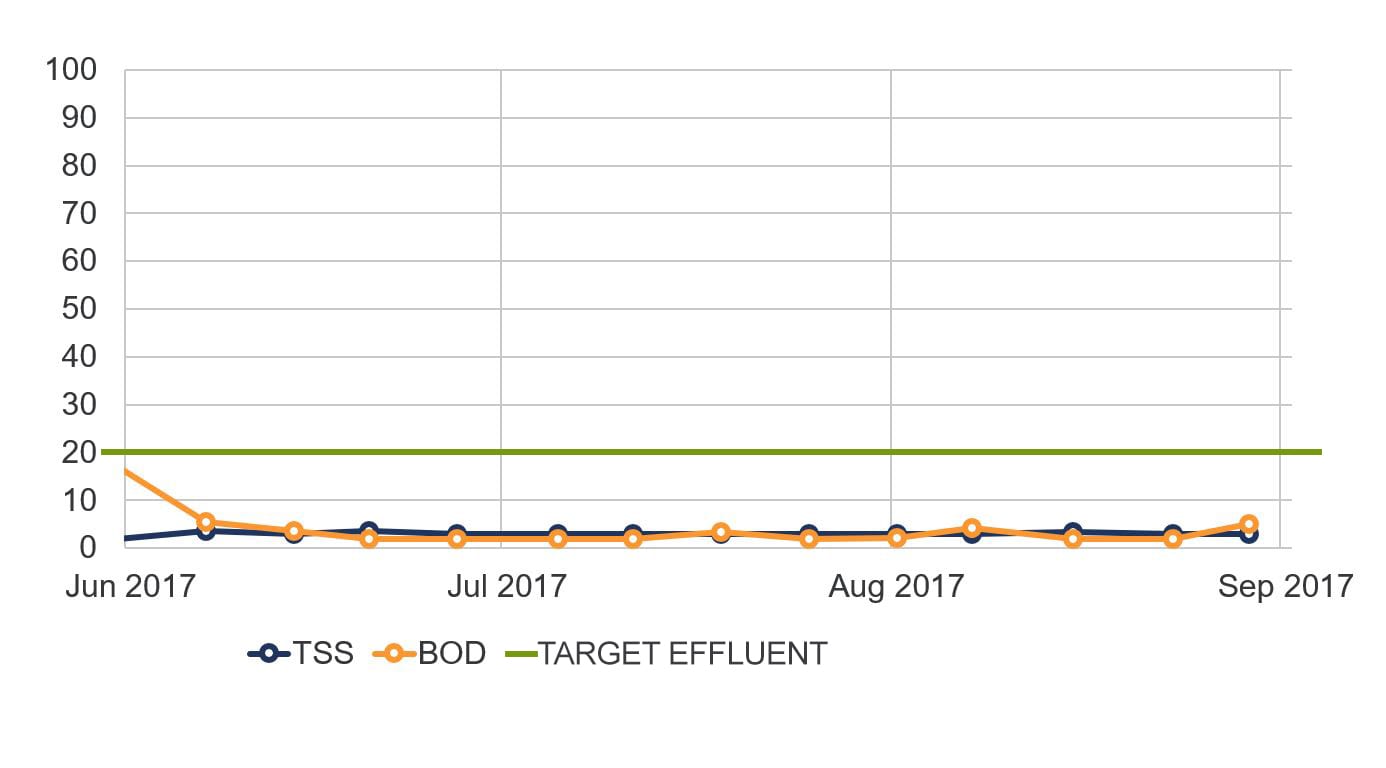